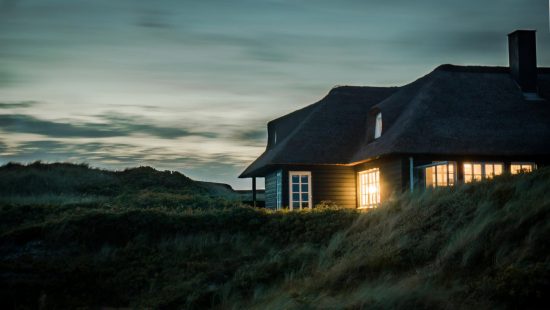 When we bought our house, we liked the location, but the house wasn’t all that great.  We, however, could not afford to destroy it and build new, so we just lived in it until we could get our debt paid down. The house had a flat roof and was a square two story box, with no basement. It had been built in the 1950’s as a cabin.  It had a detached two car garage. Finally by 1990 I felt we had the resources to add an addition to the house and had plans drawn up. This included a new peaked roof, a couple bay windows, an attached garage and an office above the garage.  We signed a contract with a builder to implement the plans. I did a lot of preparation, cutting down several large Oak trees that were way of the addition and helping tear down the old garage which was also in the way.

The construction got off to a bad start. The excavator’s backhoe was too small for the task and he dug a hole and then quit the job. This left a mess and a safety hazard, as our house sat above the hole.  Then weather turned against us and we received some very heavy rains, which necessitated hiring another excavator to fill in the hole and then once the weather cleared properly dig the footings for the addition.  We had coordinated this with the cement contractor, but he didn’t show up as promised to poor the footings, so the hole sat there for a week. The weather turned against us again, and during a heavy rain, the excavator brought his bulldozer and backhoe and filled the hole in again to protect the existing house from being undermined by the rain. The one person I could depend on was the excavator, Rudy Excavating. This same cycle of digging the footings, and then the cement contractor not showing up repeated itself again, and after a week, a rain storm moved in again. There was plenty of anger to go around.

The main building contractor returned from vacation, and was surprised that nothing had yet been accomplished. Getting a new cement contractor would have delayed the project for a year, everyone was booked solid. We tried again, the cement contractor showed up two days later than he had promised, but the weather held and we got the footings poured and set up the forms the next day for the poured concrete walls.  That night, a rain storm came through, but it was lighter than the previous rains. The next day the cement contractor showed up,  he had cement trucks lined up and a pump truck to get the cement up the hill into the forms, but because of the previous nights rain, mud had washed into some of the forms, so the forms had to be taken apart, the mud dug out and then the forms re-assembled. We got the cement poured, and after that the project went smoother.  I did, however, get a different cement contractor to pour the garage floor.